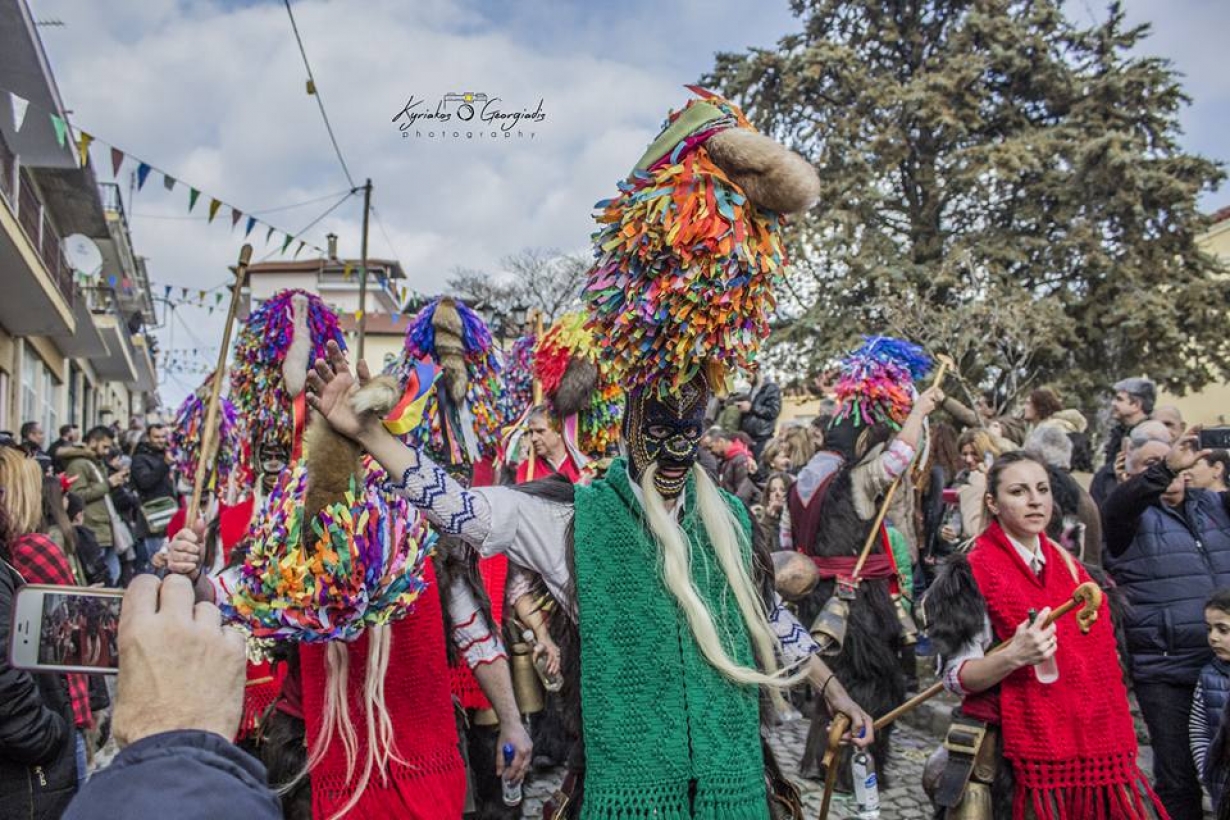 During this year’s Carnival, all the roads of Thessaloniki will lead to Sohos. The most outstanding celebration of Central Macedonia, maybe also of the whole Northern Greece, is the Carnival. This carnival celebration is undoubtedly the most traditional one, as the goat-looking “Koudounoforoi” (men wearing bells around their waist) of Sohos have an immediate connection to Ancient Greece, land fertility and God Dionysus.

It would be a shame to stay in Thessaloniki on Carnival Sunday, instead of paying a visit to Sohos. It is not just about the food and the side events taking place but if you happen to be at Agios Georgios Square of Sohos and get on a bench hearing the big bells called “batalia” and the small ones called “kipria” that Koudounoforoi” wear on them, you will understand what this Carnival is about.

Therefore, Sohos is the place to be on that Sunday. However, the uniqueness of this carnival destination in Central Macedonia, on the 10th of March, does not deprive the other Greek carnival destinations which organize carnival events from cheerfulness and joy.

For two of the days of carnival (Sunday 24thand Thursday 28th of February) you can plan, choose what to do and let yourself go!

On Sunday 24th of February, there will be the Bells Parade with bells of European character. More than 1.500 “Koudounoforoi” will take part in a colorful parade starting from the White Tower of Thessaloniki to the first port’s dock. More than 30 groups of “Koudounoforoi” from Greece and Europe will take part in this parade. Each group will present with dance and music their tradition, walking down Nikis Avenue with the aim if carrying away to a wild party all the residents and visitors of Thessaloniki. During the parade, the 5th European “Koudounoforoi” Festival, that will start on the 1st of February at Thessaloniki’s port, will end on that day.

Thursday the 28th of February, is called “Tsiknopempti” (Fat Thursday). Some years ago, in Thessaloniki, during the “Tsiknopempti”, people used to get disguised in carnibal clothing and go to a tavern, a bar or a club in order to drink and eat meat. Now all this happens outdoors, practically on the pavement. If the weather is good, Thessalonians organize an outdoor carnival party that day. Everyone has a barbecue set on the pavement in front of their shop, as well as on the roads, especially on Vasileos Irakliou Street, where the big party is! Everywhere you look there are people eating meat and people playing music with percussion and brass instruments. All this great “mess” with music, dancing, eating and disguises is already a statute for Thessaloniki!

For those who want an alternative choice for “Tsiknopempti” there is the 10th Bike Carnival. This year’s theme is the “Liberation of Animals”. Disguises, comedy, tradition and raising awareness combined together will frame this fancy Bike Parade that everyone is invited to. This environmental and societal action will be accompanied by parade floats and, of course, the King of Carnival.