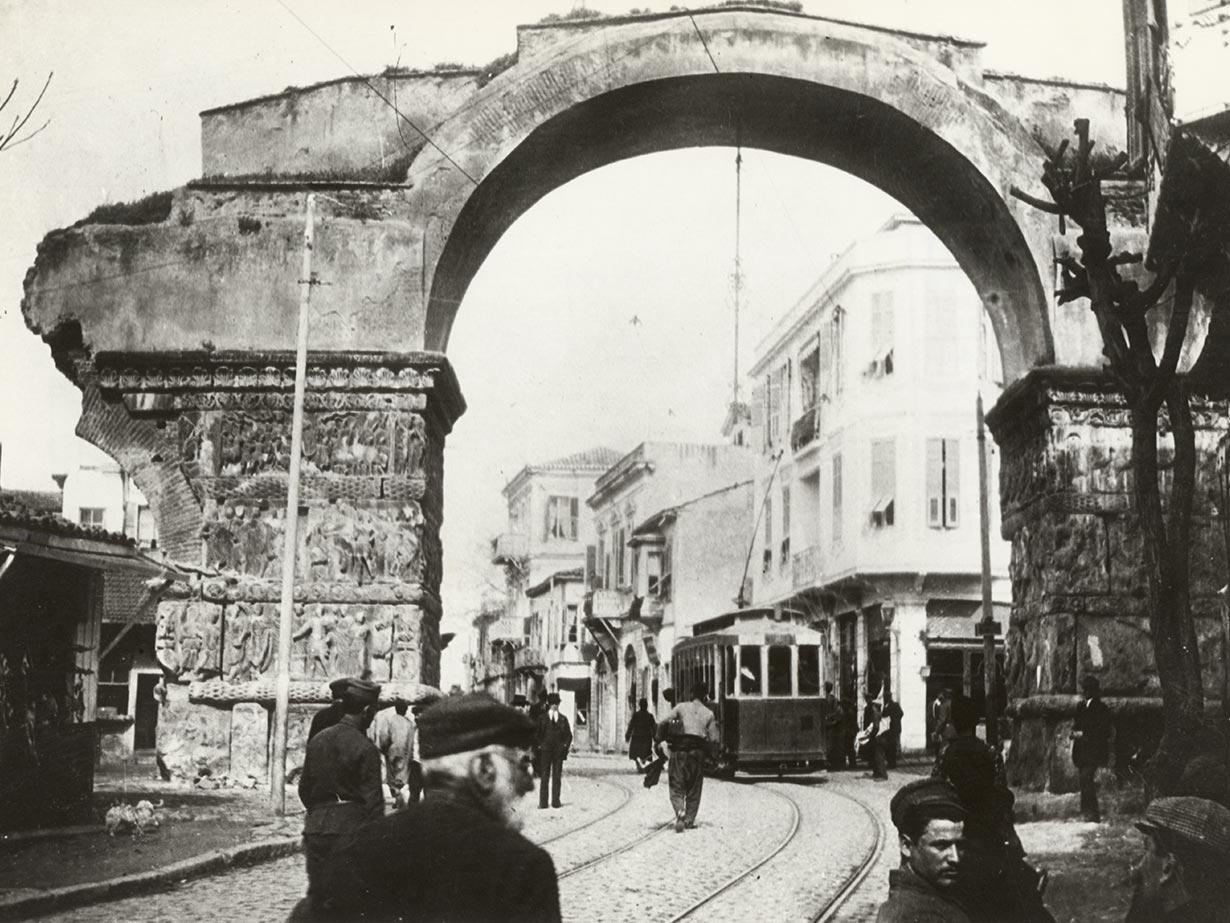 You are here: Home1 / USEFUL INFORMATION2 / History of Thessaloniki

Thessaloniki has many stories to tell, starting by the moment of its foundation in 316/315 B.C. Fortunate to have royal “blood”, since the new city was named after Thessaloniki, sister of Alexander the Great and daughter of Philip II, King of Macedonia. It was developed rapidly -due to its prominent geographical location- as one of the most important ports, and economical and commercial centers of Macedonia and the Balkan Peninsula as a whole, advantages maintained for the past 2300 years.

Undeniable witnesses of its long course over the years are its numerous monuments. Open and easily accessible to the public, live alongside its residents and tell interesting stories about different civilizations, religions, eras. We invite you to read the history of Thessaloniki so as to comprehend their significance, before you come across them, walking around the city, and to feel this uniqueness that makes Thessalonians so proud of their past.

The region of Thessaloniki has been inhabited since prehistoric times, while the oldest relics are dated back to Neolithic period, approximately sixth to fifth millennium B.C. The largest settlement was that of Thermi, giving its name to the nearby gulf, and can be tracked down, most probably, to the contemporary site of Karabournaki. Other smallest settlements are located to the regions of Toumba, Stavroupoli, Polihni.

The ambitious king of Macedon, Cassander, after overpowering the rest of Alexander’s successors, founded this new city in 316/315 B.C., by uniting 26 small settlements and honorably named it after his wife and sister of Alexander, Thessaloniki. Due to its strategical location at the northest site of Thermaikos Gulf and the Aegean Sea in general, the city became wealthy relatively fast as a commercial center and naval base of the Macedonian Kingdom. Thessaloniki was constructed according to the ancient Greek city standard architecture, taking into consideration the institutions of its citizens, religious worship, financial activity, providing at the same time, an Ecclesia Assembly and Parliament. Furthermore, it issued its own currency in 187 B.C., bearing the sign of THESSALONIKI, having its own mint at its disposal.

In 168 B.C. the Macedonian King Perseus was defeated by the Roman General Leukius Aemilius Pavlus. Thessaloniki became the capital of the second Roman administrative district of Macedonia and since 148 B.C. following the establishment of the Roman Province of Macedonia, it was the city accommodating the Roman Governor Headquarters. Its unique geo-strategic location was reinforced by the construction of Egnatia road (Via Egnatia) by the Romans, and the city became a junction connecting the Adriatic Sea with the Hellespont and Asia Minor, as well as the cities of Danube with the Aegean Sea and the Eastern ports. It’s worth mentioning that the Roman orator Cicero lived in Thessaloniki for a while. Because of the Thessalonians’ refusal to provide refuge to the killers of Julius Ceasar, Brute and Cassius, who ran to Macedonia, the city was rewarded by the Romans by declaring it “free city” (civitas libera) in 42 B.C., resulting the provision of extra privileges. Thus, Thessaloniki constitutes center of attraction not only for the residents of the nearby areas, but also many foreigners, from the East mainly (Egyptians, Syrians, Jews). It was a large urban center, cosmopolitan in its age, a city open to new ideas, religions, and foreign influences.

Apostle Paul visited roman Thessaloniki in 50 A.C., while the seed of his teaching would grow to the subsequent establishment of the city’s Christian community, while, his two Epistles “To Thessalonians” are considered to be the oldest passages of the New Testament.

During the reign of Caesar Galerius Maximilianus, glorious monuments were constructed in the city, still standing today, parts of them or as a whole: the Rotonda, the Arch of Triumph (also known as Kamara), the Royal Palace, the Hippodrome.

Very few cities have been so attached to their patron saint as Thessaloniki. During Galerius’ reign, Saint Demetrius, the patron Saint of the city, who was a young officer in the roman army, died as a martyr in Thessaloniki, following his convention toy Christianity. The temple of Saint Demetrius the Myrrh-bearer, has been a religious pilgrim worldwide up until today.

Thessaloniki kept on playing a very important part both politically and strategically after the transfer of the Roman capital from Rome to Constantinople in 330 A.C. by the emperor Constantine the Great and has been given the sobriquet “first after the first”. In the 5th and 6th century A.C. Thessaloniki was forced to drive Avarslavs’ and Slavs’ attacks, off.Due to its economic and cultural growth, at the end of 9th to the beginning of 10th century the suitable circumstances both in commerce and culture, occurred, so as to become the uprising place of two persons destined to mark the Christian world. It’s brothers Cyril and Methodius who Christianized the Slavs, while Cyril invented Slavic Alphabet.Read more here

The Byzantine Empire was raided repeatedly by numerous enemies, including the Bulgarians. In 904 AC Thessaloniki will experience acts of savagery and looting by the Saracen pirates, followed by the Normans who conquered the city for three months in 1185 A.C. Moreover, during the 4th Crusade, Constantinople was taken over by the Crusaders, as well as Thessaloniki, a conquest lasting for 20 years.

The Byzantine internal conflicts climaxed in 1342 in Thessaloniki, by the Zealot movement, between the noblemen from one side, and the Zealots as expressionists of the middle and the lower classes from the other. Initially Zealots prevailed but eventually were taken down in 1349. Following a short period under Venetian rule, Thessaloniki finally was conquered by the Ottomans in 1430.

Fourteenth century is considered as the Cultural Golden Age of Thessaloniki. The city underwent a series of cultural fermentations, both artistic and spiritual, by many scholars and laymen who were born or lived there. A distinguished figure among them was Gregorius Palamas, one of the most distinguished theologians of the 14th century and main exponent of the Hesychasts’ Movement.

In 1430 Murat II conquers Thessaloniki which will remain under Ottoman rule until 1912. The city seems almost deserted as most inhabitants have fled to the surrounding areas to escape, others were massacred and others were sold in the slave markets of the East. Most of the churches were converted into mosques and some small churches continued to function as Christian churches. From the numerous monasteries, the only one that survived throughout the Ottoman period was Vlatadon Monastery, which continues its service to date. At the same time, are being build seminaries, covered market, baths, fountains and the monument – symbol of Thessaloniki, the White Tower.

In 1492 a major event changes the city’s anthropogeography. In Thessaloniki arrive 15-20000 Jews expelled from Spain and their arrival gives a new dynamic to the commercial and industrial activity of the city, while enhancing its multiculturalism. In the 18th century the rapid development of trade leads many Western countries to open consulates in Thessaloniki and the city beyond economic prosperity acquires again cosmopolitan character. In the momentum of the Greek Revolution against the Turks in 1821 reaches Thessaloniki, while the revolutionary movements in Macedonia are violently suppressed in the period 1821-1823. At the end of 19th century Thessaloniki connects by rail with Skopje and from there with Europe and Istanbul, also the first horse-drawn tram are being installed, gas and raw industries make their appearance. . Thessaloniki gains the appearance of a modern European city.

In 1903 the Bulgarian Komitat aiming territorial claims in Macedonia, started the action by blasting Thessaloniki and the Macedonian Struggle breaks (1904-1908). In 1881 in Thessaloniki, is born Mustafa Kemal Ataturk, Turkey’s reformer and first president of the Turkish Republic.

Milestone in the history of Thessaloniki is its release, with the Greek army entering the city after the signing of the protocol of surrender on October 26th 1912, on the day of the feast of the patron St. Demetrius.

Greece did not participate in World War I from its beginning however will eventually allow the use of the port of Thessaloniki by the Entente forces for refueling the allied forces, resulting in 1915/1916, the city being flooded with thousands of British and French soldiers.

In the summer of 1917 breaks out a big fire that will burn most of the historical center of Thessaloniki, leaving 73000 homeless and unemployed. Although the city is trying to regain itself after the fire, the Asia Minor disaster in 1922 creates new social and economic conditions for Greece. With the Greek-Turkish population exchange that was agreed in the Treaty of Lausanne in 1923, tens of thousands of Greek refugees from Asia Minor, Eastern Thrace and Pontus are being settled in Thessaloniki. Despite the initial problems of the massive influx of Greek refugees, their presence will give a new impetus to the city.

The Germans enter Thessaloniki in 1941. One of the most tragic consequences of the German occupation in local history is the extermination of the Jewish community of the city. In 1943 the 46.091 Jews of Thessaloniki are being transferred to Auschwitz concentration camp and Birkenau to return only 1950 of them.

Thessaloniki breathes again the air of freedom in October 1944.